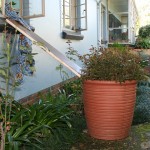 So last night was not normal for me by any means. By six in the evening, I was exhausted. Mentally and physically. My body just ached.

But I have to admit, writing yesterday’s blog entry took a weight off me. Things can play on your mind without even realizing it. You think nothing’s bothering you, but you lose sleep or just don’t sleep as well as you would want, until the exhaustion creeps up on you and you sleep way more than usual to catch up.

That’s what happened to me last night. I went to bed at 18:00 and only woke up at 01:00 the next morning. I did not dream, or anything. It was a very deep sleep, from which I snapped awake needing the bathroom.

Not wanting to go straight back to sleep, I sat on the computer a bit. I became aware that Gemma was outside when I heard a plaintive cry from outside the window. Grabbing the torch, I shone it outside and found her standing on the plant pot, at the bottom of the plank. Being such a late (or early) hour, with everyone asleep and the house locked up, there wasn’t much I could do to open the door, since I did not want to disturb anyone.

I had to come up with a “Plan B”, which actually was not too difficult. Unbuttoning my jacket which lay folded on the bed, I tossed it out the window and tied the sleeve to the burglar bars. Using a stick, I got the jacket to lie across the board and low enough for Gemma to reach up and gain purchase on her way back up into my room.

She’s gone in and out the window at least once more that I know of and hoping she’ll do it more regularly in the time to come. Don’t worry, I do plan to make a better arrangement than a jacket hanging out the window. I have some old wooden coat hangers that I want someone to nail to the board instead, to make a ladder.

But in the meanwhile, she is still using the litter tray. First thing she did after I cleaned it this morning, just about.